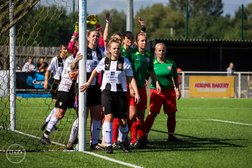 After Sunday afternoon’s win against a good Derby County Community side, United’s women’s team hosted Notts County at Ashby Avenue. Notts County compete at the same step as Lincoln United but play within the south section of the East Midlands Women's Regional Football League. The Magpies were unbeaten in their league before the season ended, winning two games and drawing one; the two sides met on the opening day of the season in The FA Cup, a thrilling 4-4 draw which saw United progress on penalties.

The game saw a number of players who were unavailable for the away trip against Derby County Community. The likes of Churcher, Davison, Newman and Carter all returned to the side as they looked to return to full fitness before ‘The Whites’ opening fixture on Sunday against Lincoln Moorlands Railway LFC in the Trevor Clifton Trophy.

It was a physical and tight affair in the first half with both teams struggling to create clear cut chances inside the box. However, United were on top territorially and managed to keep County within their own half for long periods of time. Despite no clear cut chances, The Whites hit a succession of long-range efforts and half chances; Murrell, Wilson, Hopewell and Pettit all testing the keeper.

United changed the majority of their players at half-time and formation. The changes didn't affect the flow of the game and United had half chances early in the second half through Duxbury-Mead and Lauren Carter. Despite The Whites dominance, it was County who took the lead with only their second shot of the game; a misplaced pass on the edge of the box found the feet of the County striker who curled a
spectacular effort past Gilbert in goal.

United found another level of resurgence after conceding and despite County having some chances on the break, including one that trickled past the post, The Whites were the team in the ascendency looking to level the scores. United applied great pressure to the Notts County defence in search of an equaliser but the county defence did well to withstand the onslaught from the Lincoln United attackers.

Further chances came and went for Duxbury-Mead, Keyworth, Barnes-Ford and Churcher. United also found great joy from set-pieces during the second half, the tricky feet of players such as Churcher and Duxbury-Mead drew multiple fouls from the tiring defence of Notts County.

After immense pressure ‘The Whites’ finally broke through a resilient County defence with the best passage of play in the whole game. Quick, fluid passing from the Lincoln United’s players, who were camped inside the Notts County half, found the feet of Tracey Duxbury-Mead who played a clever defence-splitting pass to Abbie Murrell. Murrell twinkle-toed her way past the opposition centre-half before picking out a brilliant left-footed cross back to Duxbury-Mead who flicked the ball onto Elise Keyworth, leaving her with a simple tap in on the line.

United weren't done and came close to winning in the final minute of the game; Duxbury-Mead pressed well, pinching the ball from the County defence, her lay-off found Churhcer but her effort from outside of the box was skewed high and wide of the post.