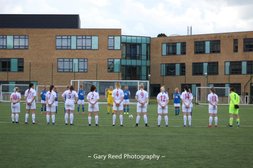 Lincoln United Women’s qualified for the semi-finals of the Trevor Clifton Trophy with an impressive away display against Peterborough United Women’s. 'The Whites' came into the game as underdogs as they were set to do battle with the Premier Division league leaders.

After a cagey start to the game, and a brilliant save by Gilbert from a 'Posh' free-kick, Lincoln United found themselves a goal behind after the home side broke the deadlock after 15 minutes. A defence splitting direct ball that was converted into the net by the Peterborough winger.

The early goal from Peterborough proved to be a huge wake-up call for ‘The Whites’. Lincoln United showed why they qualified for the quarter-finals of the tournament and began to control the tempo of the game with decisive passing and smart movement which made it difficult for the home side to defend against. In the 24th minute, a through ball from Lauren Carter found Abbie Murrell who used her pace and skill to take the ball around the Peterborough keeper, before slotting it into an empty goal to score the equaliser.

‘The Whites’ began to dominate the half, learning from mistakes and leaving Peterborough United with no space to run in behind. A moment of magic happened in the 37th minute when Lauren Churcher took the ball past her opposition defender before hitting a thunderous strike into the top corner to put Lincoln United into the lead for the first time in the game.

Lincoln United kept up their relentless pressure for the rest of the first half and it paid off. Just before halftime in the 42nd minute when Abbie Murrell used her blistering pace to skip past her opposition counterpart, drawing a foul just outside the 18-yard box. 'The Whites' punished Peterborough United from the set-piece with a trademark looping cross from Churcher that found Steph Powell at the back post who fired an emphatic volley into the top corner.

‘The Whites’ started the second half in the same way as they ended the first. Lincoln United were on the front foot from minute one and this proved decisive as Kirsty Dalzell scored a towering header into the bottom corner that left the goalkeeper with no chance in saving it.

The balance of the game suddenly shifted in the last 30 minutes, a series of controversial fouls and indecisive decision-making played into the hands of the Peterborough players who were fired up and filled with momentum. Megan Parrett halved the deficit which seemed like a consolation at the time, but it was proven to be pivotal after 90 minutes.

Two minutes after her first goal, Parrett struck a low-driven shot into the bottom corner in the 71st minute to reduce the gap to just one goal which set up for a nervy last 20 minutes at the Idverde training ground.

Posh completed the comeback 10 minutes before the final whistle after Pendred struck a tidy shot past Gilbert from close range after fantastic footwork by the home side's #10.

In a game that looked dead and buried at 4-1, Peterborough United showed why they were sat top of the Premier Division with their clinical attacking and physicality. Throughout the course of the last 30 minutes and early in the first half, Katy Gilbert pulled off some unbelievable saves, however, her biggest moment of the game came in the last few minutes where she pulled off a brilliant reflex save to keep ‘The Whites’ in the tie.

A tense first half of extra time ended goalless as both sides were clearly lacking in the same intensity that they shared on the pitch in normal time due to tired legs. However, a tactical change by the boss, Chris Funnell, proved to be the difference in the second half of extra time as ‘The Whites’ regained the lead in the 108th minute, thanks to a composed finished by Lauren Churcher who scored her 11th and most important goal of the season; the strike ended up being the match-winner in a highly competitive game.

It was a truly emotional rollercoaster for both sets of teams in what was arguably the game of the season. Lincoln United will now play Premier Division side, Mansfield Town LFC in the Semi-Finals of the Trevor Clifton Trophy on the 23rd May.