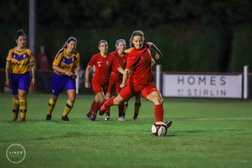 'The Whites' will have face off against Chesterfield WFC in the Trevor Clifton Trophy final after Lauren Churcher’s 81st minute penalty gave them the win against Mansfield Town LFC.

United started off quickly, pushing forward and were rewarded after the referee blew his whistle for a penalty in the 12th minute. Churcher stepped up to take the penalty and slotted it to the keepers right, just out of reach.

Mansfield responded and started to grow into the game. Katy Gilbert found herself tested in the 16th minute, parrying the ball away before Katie Davison cleared the ball. Neither team found a way to challenge the opposite keeper for the rest of the first half, with the majority of football played being a midfield battle.

A fierce half-time team talk from United's management team sparked a response from the players. 'The Whites' came out playing the best football of the game early in the second half until a freakish Mansfield goal flew across the field and in. A free kick from just inside United's half assisted by the wind, beat all the players in the box before bouncing into the net.

This did not seem to startle United. Five minutes after conceding they had the ball in the back of Mansfield’s net. Unfortunately for Elise Keyworth her pretty finish came from an offside position, leaving the game level still.

The game stayed in the balance for a while, with neither team threatening the other until Keyworth slid Murrell through with a pin-point accurate pass. Through one-on-one Murrell lined up a shot before being taken out by a Mansfield defender. As Abbie received treatment for what looked a serious injury, Lauren Churcher stepped up, putting her penalty where no one could reach it.

An intense 11 minutes of added time came to an end and smiles lit up the pitch.

Katie Davison and Chloe Brock-Taylor played a cool and composed game at the back, winning the ball whenever tested and showing their quality when the ball was at their feet.

Scoring two, including the winner, topped off a quality performance for Churcher. After scoring the winner for 'The Whites' in extra time of the quarter final, she continued her heroics today with the two goals her team needed.