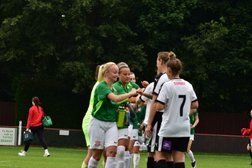 After a frustrating start to the 21/22 season, with isolation and injuries taking its toll on both fixtures and training, Lincoln United Women got underway against Hull United who thankfully stepped in last minute.

The first-half got underway and United for the main part were in control territorially, despite not having many clear cut chances. The first chance of the game came from an Olivia Smith corner which was met by Katie Davison but her header was cleared off the line. As the match progressed Hull United grew into the game and had one-half chance when Gilbert held a long distance volley, straight down the middle of the goal.

The away side should have led at the break, Limb was dispossessed on the halfway line but the attacking player could only strike the outside of the post when finishing. Hull should have taken the lead again when they cut 'The Whites' open on the edge of their own box but United's best player on the day, Brock-Taylor, thwarted any danger.

United made two changes at half-time, introducing Richardson and Hopewell, however, Hull had a penalty inside the opening five minutes of the second-half. A good ball in behind Davison and from the resulting cross, United's captain was deemed to have handled the ball, the match official pointing straight to the sport. Walker stood up for Hull, having had a great first half, but she blasted the ball not only over the goal but over the John Wilkinson Stand.

Whilst 'The Whites' didn't react in the manner expected, they did take the lead. A well cleared ball by Chloe Brock-Taylor caused the Hull backline problems, the resulting short back-pass that followed gave Amy Nelson a chance to catch the ball and work towards goal. Nelson did get a toe but was brought down by the Hull keeper, again, leaving the official no other option but to point to the spot. Olivia Smith, the scorer of United's last goal, picked up the ball and confidently finished into the bottom left-corner.

On the 70th minute, United had a warning. A well clipped ball in behind United's backline on the edge of the box found Hull's #10, her great first touch set her up perfectly to slot the ball away but Gilbert made herself big and kept the ball out.

Three minutes later, Hull did equalise. Another well executed ball found the Hull striker, her first chance was again well saved by Gilbert but on the rebound, #9 found the net to bring Hull level, nothing less than their performance deserved.

Lincoln United didn't react well enough and could have been behind when a lobbed effort, had it been executed better, should have resulted in a goal. Hull failed to convert another chance when a defensive mix-up saw the Hull striker fluff her lines from 5-yards out and the ball dribbled wide when it was easier to score.

'The Whites' had the final chance of the match though. Freeman and Peaker combined well, finding Nelson free in the box but her toe-poked effort could only go wide of the post.