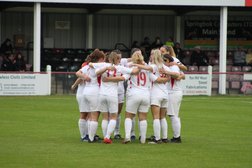 PROFESSIONAL UNITED TURN ON THE STYLE IN GRIMSBY

10 days after playing and defeating one women's side from Grimsby, 'The Whites' took to the road to take on another side from the North East of Lincolnshire, Grimsby Borough. A fixture fraught with missing personnel and injuries in the build-up but United still took a 12 player squad to play in their 4th pre-season fixture.

'The Whites' got off to a great start which continued throughout after some fantastic, free-flowing, attacking football. The first goal came as Churcher's shot was parried out into the middle of the area and Duxbury-Mead was on hand to apply the finishing touch.

Nelson was fantastic, stretching Grimsby Borough for the whole of the first half. Five minutes after United's first, Nelson latched onto a teasing ball and coolly slotted past the onrushing Borough keeper.

Minutes later, Churcher got in on the act with a fine finish from the edge of the box. United three to the good inside 15 minutes.

Inside 20 minutes, Duxbury-Mead had her second and United's fourth. Neat build-up in and around the box saw Duxbury-Mead with a swift turn allowed United's striker to slot into the far corner.

After a scintillating opening 20 minutes, United continued to probe and create chances but Borough could have scored after a lapse in concentration, Gilbert produced a fantastic save to keep 'The Whites' sheet clean. Five minutes from half-time, United grabbed their fifth. A cross from the right-hand side was well controlled by Carter and he volley on the swivel gave the Borough keeper no chance.

A minute before half-time and United made it six. Another cross was cleared to the edge of the box where Hopewell struck her shot but the keeper spilled it and the ball trickled over the line.

A fantastic half of football from 'TheWhites' saw goals from all angles and five different scorers.

The second half continued in a similar fashion, this time United scored quicker than they did in the first half. Carter, who had slotted in as a full-back, hit a looping cross which found the side-netting inside the far post.

Churcher was the third player to grab a brace. Again, great build-up play found Churcher baring down on goal from an angle, inside the 18-yard box, and an instinctive toe-poked finish found the far corner.

15 minutes later and Churcher had her hat-trick. A fantastic Cruyff turn found United's attacking midfielder a few yards of space before a dribble and drive, along with a delicate dink found the far corner of the net.

Five minutes later and United hit double figures. Borough defended a corner but United recycled the ball to the back-post and Powell was on hand to head the ball into the net.

United had more chances through Freeman, who was fantastic in the second half, and Duxbury-Mead. United as a collective were fantastic from back to front. Hopewell added United's final goal in the 89th minute, a great strike from the edge of the box found the top corner, leaving the home keeper no chance.

A fantastic away performance settles United as they head into two challenging home friendlies against York City and Sutton Coldfield Town, respectively. The first of which sees 'The Whites' play Chris Hamilton's, York City side, on Wednesday 18th August, 19:45 KO.