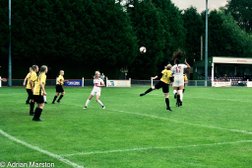 Another disrupted week which saw the midweek friendly against York City cancelled due to covid in the away camp, United were to face Sutton Coldfield Town in their penultimate pre-season fixture. Sutton Coldfield Town represent a team that knocked out 'The Whites' in last season's FA Cup, the result on that day ending 1-0 to 'The Royals', and therefore this fixture was going to be as close to a league match as possible.

The match was played mainly in the middle third of the pitch as expected with both teams matching each other physically. The first break through of the match came the way of the away side when Gilbert got down smartly to save. United responded and took the lead through a well delivered corner, met by the superb, Demi Barai, whose header found the net.

United's second sight on goal came when Churcher and Farrow combined, the latter's cross was well defended but Carter couldn't turn her shot from the edge of the box on target; a half chance. It was soon 'The Royals' turn to have a half chance, on the counter, their winger cut in and hit a shot from the edge of the box but Gilbert was comfortably equal to it. Both United and Sutton created further half chances through their attacking players but nothing clear cut until United's, Amy Nelson, found herself one-on-one at an angle but he left footed shot was saved by the away team's shot-stopper.

United started the second half brightly when Lauren Carter released Churcher, the attacker bared down on goal but struck her shot right at the keeper, Farrow nearly benefitted from the rebound but the ball rolled agonisingly the wrong side of the post.

Before the equaliser, both sides registered half chances from the edge of the box but neither tested the respective keeper. The away side got back in the game after an error in United's defending, Gilbert hesitated and Brock-Taylor handled the ball whilst on the floor. 'The Royals' didn't need any further invitation to level the score as the penalty was duly smashed home into the roof of the net.

Sutton nearly took the lead from a corner but Carter cleared off the line. United then spent a period of time with sustained pressure in their opponents half, Carter, Churcher, Barai and Farrow all having half chances.

It was then Sutton's turn to have a flurry of chances, some better than United's; one struck the post with a weak shot from distance and then more indecisiveness in United's backline caused them problems which nearly allowed Sutton to take the lead again. However, United finished the stronger of the two, Churcher striking twice from distance but the keeper was equal to both.

A well fought pre-season friendly which will replicate the upper end league fixtures which are to come during the 21-22 season.