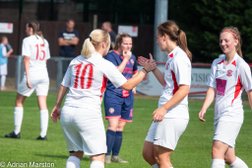 Lincoln United FC - Women, kicked off their debut season in the Premier Division of the East Midlands Women’s Regional Football League with an emphatic 10-1 victory on Sunday against Borrowash Victoria Women's.

The visitors snatched the first goal of the game after just five minutes from a looping effort that beat the Lincoln United keeper, Richardson in goal.

'The Whites' responded well to conceding first. Just two minutes after the opening goal, Duxbury-Mead latched onto an accurate through ball before rounding the keeper and finishing into an empty net to equalise.

Five minutes later, Duxbury-Mead claimed her second goal of the game to take the home team into the lead for the first time with a brilliant header into the bottom corner, following Murrell's shot that cannoned back off the crossbar.

Just after the ten minute mark, Smith whipped in a teasing out-swinging corner which was met by a bullet header from Murrell.

After a slow start, United had firmly taken a foothold of the game and dominated from defence to attack. ‘The Whites’ scored their fourth goal in just ten minutes which came from another of Smith's pin-point corner, met by Nelson at the back-post who buried it past the Vics goalkeeper.

Inside 40 minutes, Murrell showed her class in the Borrowash box by finding an extra yard of space with her trickery, before striking a powerful shot into the side netting.

Just before halftime, the attacking prowess from Churcher proved to be too much for the Borrowash backline. The attacker twinkle-toed her way past multiple players before finishing coolly past the keeper.

After a sloppy start, ‘The Whites’ free-flowing football and clinical finishing put them into a commanding lead going into half time.

The second half continued in a similar fashion to the first with the only difference being the intensity from the first minute of the half. ‘The Whites’ came out the blocks fast in the second half and grabbed the first goal after five minutes, thanks to a low-driven cross by Churcher that found the feet of the ever so reliable Murrell who dispatched the ball into the bottom corner.

After a flurry of chances including a double save by the Borrowash keeper, which kept out attempts from Murrell and Churcher, Borrowash Victoria survived their longest spell in the game without conceding. However, in the 72nd minute, Murrell snatched her hat-trick after firing a calm finish in the bottom corner from another Churcher cross.

Just two minutes later, Murrell bagged her fourth and Lincoln United’s ninth goal of the game after pouncing on a loose ball from a corner.

In the 85th minute, the 194 supporters at Ashby Avenue were treated to a world-class goal from the on-form Churcher who was a constant threat all game.The Lincoln United number 7 struck a thunderous strike from more than 25-yards which whizzed into the top corner. The goal was a moment of magic and even the opposition supporters applauded the magnificent effort.

A dominant performance from United in their opening game of the season sees a comfortable victory past a resilient Borrowash Victoria side.
‘The Whites’ will now travel away to Chesterfield Women's on Sunday 19th August, 14:00 KO as they look to keep up their winning ways in the league.