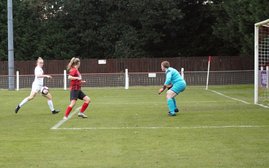 Lincoln United FC - Women are through to the First Round Proper of the FA Cup for the first time in their history after beating Millmoor Junior Ladies 6-1 at Ashby Avenue.

After a weeks’ break from action, Chris Funnell’s side returned to action against a hard-working Millmoor side who were determined to cause an upset. ‘The Whites’ started the game quickly and confidently, dominating the early possession of the ball. It took only four minutes
for the home side to break the deadlock, Abi Ringrose latched onto a teasing cross to fire home from close range and put Lincoln into the lead.

Just two minutes later, Ringrose got a quickfire brace after she plucked the ball from the air and fired a shot past the opposition keeper to double the score-line.

The home-side were camped inside the opposition half for the first 20 minutes of the half, making use of both flanks which was stretching the backline of the side from Rotherham. In the 22nd minute, Olivia Smith found a yard of space out wide before putting in a cross which looped over the keeper and rattled the inside of the far post and into the back of the net to make it 3-0 to United.

After dominating the opening spell of the half, Millmoor pulled a goal back against the run of play in the 25th minute. An in-swinging corner found the head of the away defender who converted from close range.

Just before the half-time break, Churcher went on one of her trademark runs on the flanks, where she used her trickery to beat the defender before floating in a delicious cross which was met in the air by Murrell’s head, claiming her 22nd goal of the season.

The second half started much quieter than the first, with a lack of action and the game already won in the first half, the manager, Chris Funnell decided to make some early changes in preparation for an important battle in the league next week. One of the substitutes that came on was Lucy Farrow who made an impact.

Farrow won a penalty which consequently Olivia Smith missed by rattling the crossbar however, the two would combine again just minutes later when Smith's looping ball ran through for Farrow to round the keeper and get her name on the scoresheet in the 78th minute with a composed finish into an empty net.

Lincoln United are now through to the First Round of the FA Cup where they hope to lock horns with some of the best teams in the country and showcase their undeniable talent.

An emphatic performance from United gives them a huge boost in confidence going into a challenging away league game against Northampton Town on Sunday 31st October, 14:00 KO.