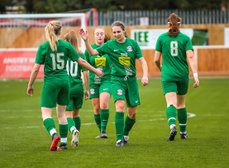 A ruthless attacking performance combined with solidity in defence resulted in ‘The Whites’ convincingly winning 5-1 away at Basford United.

A very quick start to the game meant the visitors took the lead after only 4 minutes. Making her first start for the side, Zoë Devonport showed her intent by pressing down the home side’s goalkeeper and winning the ball off her. All she had left to do was pass the ball in the open goal from 2 yards out and she gladly took the opportunity.

The opposition equalised 13 minutes later as ‘The Whites’ failed to clear the ball from their defensive third. Basford’s striker took the ball in behind the defence and executed a beautifully-placed shot over Rosie Davidson in goal.

However, the away team didn’t take long to re-take the advantage and Abbie Murrell and Lauren Churcher combined to restore their lead. Murrell raced onto a brilliant long ball from defence before being brought down by the keeper, inside the box. Churcher took the resulting penalty and placed it in the bottom left corner, where the keeper couldn’t reach.

The first half appeared like it was going to end with the side in green leading by one goal, but that became two in the second minute of added time. Murrell made another great run down the right wing, before producing a great cross to Devonport in the box, who met it with a brilliant first-time finish past the keeper to double her tally.

Churcher almost claimed her second goal as well, but she couldn’t finish from the edge of the box from a wide angle after taking the ball around the keeper. That brought a close to the first half and the visitors would have been satisfied with their performance.

The second half felt as if it was going to be filled with not much action, but that changed once the game reached the later stages. Tallulah Freeman replaced Demi Barai as manager Chris Funnell looked for another attacking threat to increase the team’s lead. 'The Whites' remained defensively strong, nullifying the home sides' changes when they went on the counter and keeper Davidson playing part in ensuring a clean sheet was kept for the final 45 minutes.

With only 9 minutes of normal time remaining, Megan Long played a great pass over the hosts’ defence. Murrell raced onto it and finished with immense composure as her effort was fired into the top right corner.

Only 5 minutes later, Annie Ward, Churcher and Freeman combined well in the middle of the pitch to play Frankie Wilson down the left wing. She whipped in a cross to Murrell who took her time before smashing the ball into the same part of the goal she did just before.

That was the last meaningful action in the game before the referee called time on the game. ‘The Whites’ took the hour-long journey back home accompanied by the 3 points they claimed comfortably.

They’ll have to wait to build on a impressive performance until they play Chesterfield Ladies at Ashby Avenue on 27th November.