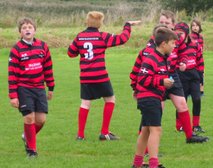 The Lions won an entertaining battle, scoring 6 tries to 5

The Lions won an entertaining battle, scoring 6 tries to 5, a score that looked close because of two late Wadebridge breaks.
Jay Mason, playing at scrum half, grabbed a hat-trick, chasing up and overpowering the opposition for two of his tries. Josh Pidcock scored two with spectacular runs from his own half. Oli Aniyi finished off the best team try, after Joe Chapman had won the ball from a maul. James Slater converted five of the six tries.
The Lions pack made big improvements from the last match with Ethan Crabb, Max Dennison, Michelle Champion and Mia Rowe all starring. All players contributed to the ruck – often winning good Wadebridge ball by virtue of numbers present. All sixteen players were a credit to the team and can look forward to their next match with confidence.
This was the team’s first match sporting their new Talehay Holiday Cottages sponsored shirts. Visit www.talehay.co.uk for more information.
Share via
FacebookTwitter
https://www.pitchero.com/clubs
Recent news