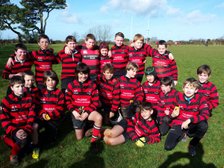 Liskeard Looe made an early start in trekking down to Camborne for a series of three mini matches played thankfully under a spring sun. The 18 players rotated between games and gave a fine account of themselves. The opening encounter was won four tries to one with Oli Bragg running like a wizard around the pitch, creating openings for his team mates to capitalise on. In the second match, and with more players who are new to the game, a spirited performance saw Liskeard Looe defeated three tries to one. In the final match Liskeard Looe again proved dominant and perhaps should have won by more than two tries to one. Josh Pidcock and Oli Aniyi both picked up two tries, with some outstanding strong runs; Jay Mason, Harry Barlow and Owen Harris were all rewarded for fine efforts with a try a piece. Mia Rowe was again impressive in the scrum, driving forward and tackling, ably supported by Ethan Crabb. Callum Slater, pictured as man of the match last week, carved his way through the Camborne line but just failed to score; Jago Adams did the same just being pulled into touch. It was probably the best away performance by this young team: they should all be proud of themselves.
Share via
FacebookTwitter
https://www.pitchero.com/clubs
Recent news