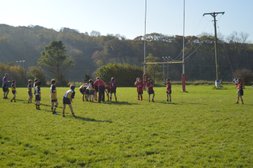 6 Intrepid Lions made the journey to Wadebridge to face a big opposition.
Despite not having all the team members, so they borrowed a few form Wadebridge to form a team, with Liskeard being the majority.
First half consisting of 20 minutes, nearly all Wadebridge way, they ran in 3 trys to Liskeards 1, as is took a while for two teams to be come one.
Second half was a lot different Liskeard ran in a whopping two trys in 4 minutes to make the score 3/3.
Wadebridge came back within the last 10 minutes with an extra 2 trys, but Liskeard combined team did not give up hope they then scored 2 more trys to make the score equal 5/5.
But in the last dyeing minute William battled his way over wadebridge's try line to make the final score Liskeard combined 6 Wadebridge 5 .

Player of the Match William.