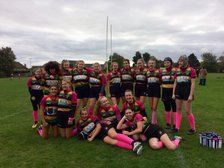 15 tries saw Littleborough Under 15's romp to 83-0 victory over a mixed Sedgley, Rochdale and Manchester Under 15 side.

Despite starting the game with just 12 with Tilda Robinson-Burgess and Kirsty Bella being late for kick off. The Pink Warriors quickly got into their stride with 4 quick tries.

First fly half Ebony Clegg benefited from a series of Boro probes into the Barbarian half by the likes of Grace Garner and Rowan Kean to score the opener, before her fellow backs Kiera Boardman (2), Courtney Mills and winger Molly Yates also got in on action to give Littleborough a healthy lead.

In between the frantic opening exchanges and plethora of tries. Right winger Mollie McCarney was close to her first try in what was a special performance for an ever improving rookie. Fortunately for the visitors, number 8 Ellie Fitzgerald was on hand to lend some strength and muscled the ball free to score.

The mixed Barbarian team of Manchester, Rochdale and Sedgley Park understandably were finding it difficult to build possession of the ball against a team counter rucking excellently.

And this only led to further tries for Littleborough. Flanker Kirsty Bella danced through numerous challenges to score a quick fire double.

There was even time to squeeze in a try for long term absentee Tilda Robinson-Burgess. The hooker turned flanker for this game has returned from a broken ankle to reinforce a strong Littleborough pack.

Sedgley's Park Lane was a cold and blustery host as the conditions made even numerous layers seem worthless. On the other had, it was useless to stop Boro teams giving it all they had in an effort to warm hands and hearts.

Unfortunately for the home side, the second half took a similar feel. Boardman and Bella (x2) completed their hat tricks and some. While Courtney Mills celebrated her birthday in style with another long range effort.

Littleborough's performance was as much about how good they were in defence as they were in attack as the likes of Ellie Overton and Lily Galvin stifled the home side.

You couldn't argue that the mixed Barbarian gave up as they soldiered bravely on and made a few breaks of their own.

However this would be a day for Littleborough's Pink warriors to enjoy as they scored 2 more through Boardman and Yates.

All in all, this was a hugely satisfactory afternoon and a welcome boost to confidence and momentum as they made it 2 from 2 heading into the county break.