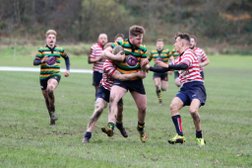 Littleborough's second team did the best they could with a tremulous league campaign which derailed early season hopes.

After winning the first 3 games and looking well placed for a promotion place early on in the season. Withdrawals by opposition in the home games curtailed momentum and team cohesion.

Early season victories against West Park, Bolton, Leigh and including a sensational 54-20 victory on the road at Fleetwood had seen the second team on course to have a similar season to the previous years standing of 4th if not better.

Littleborough then had their momentum snuffled as they ended up only 2 games in 7 weeks due to teams like Southport 2s to bring a team to Rakewood as well as horrible fortune with horrendous weather. And with that tough away games and subsequent defeats at champions Thornton Cleveleys and promotion chasing Tarleton closely followed either side of Christmas

New year came new optimism that the side would pick up their usual post Christmas form and march their way back up the table. Victory against Vale of Lune 3s which saw Danny Lawlor amongst others get over the whitewash, along with an agonising draw at Bolton suggested that would be the case. Tries that day from Dylan Critchley, back row come fly half Paul Fino and Konrad Hill nearly secured victory at a tough Mortfied Pavilion.

However surprise home defeats to Southport and Leigh saw the Boro side's faint hopes of promotion disappear and mid table mediocrity prevail. One thing they were going to have to fix is their record against the top 4 sides with only 1 victory to show for it.

In between the disappointing defeats, came one of the best performances of the season at home to Tarleton. Playing with tenacity in defence and freedom in the backs, the boys took victory by 36 points to 26. First half tries from Konrad Hill, Captain Chris Collins and Danny Lawlor were met by a stunning team move finished by the teams top try scorer for the season Lawlor.

With little to play for other than pride in the jersey, Littleborough played with more freedom in their game plan and it seemed to work a treat as they picked up 10 points from their last 4 games.

The last game of the season demonstrated exactly how the season had gone for the second team this year. Only able to field 13 players away at Eccles, the players put everything on the line and were rewarded with not only victory but with some fantastic tries to remember. One in particular for Alistair Godwin sparked wild scenes of jubilation when he stole a line-out 15 metres and charged over the line for his first ever senior try.