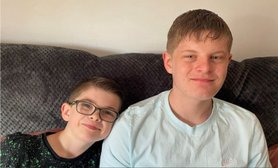 RUGBY’S A LIFELINE FOR ELLIS & FAMILY

Six years ago, Ellis Johnson began his rugby journey with Littleborough RUFC and his mum Lisa says it has been a life saver.

She wants more awareness about the benefit that sport, and rugby in particular, has for autistic children.

Lisa is the Littleborough club’s Lead Safeguarding Officer and the U14s Team Manager. Dad Graham is one of the U14 coaches at the club. "I’m a very proud autism rugby mum. When Ellis is able to self-regulate on the pitch, when something has not gone right and he is still able to listen to ‘Sir’ with respect, when an opposition team-mate is injured and he stops playing and tends to them - these moments reinforce my belief that rugby is the right thing for Ellis, and the right thing for us as a family," says Lisa.

While each day is a battle, dealing with her son wanting to change who he is, fighting for educational provision or dealing with his difficulties when out in public Lisa adds:
“Autistic individuals, like Ellis, thrive on structure, routine, knowing what comes next. There are numerous programmes of ‘therapy’ dedicated to improving their communication, cognitive and motor skills but as an autism parent, one thing I have learnt is that there is one form of ‘therapy’ that works for Ellis and that’s rugby.

“Rugby has been a lifeline for Ellis and us as a family, because it is inclusive. Ellis is living proof. Based on laws, and core values, it’s a structured game that allows a lot of physicality, which meets his needs for sensory input. It also gives him an interest, something to look forward to on a weekly basis.

“Rugby is also about people accepting that there are individuals who face difficulties but can achieve because others are willing to give them support. When Ellis pulls on his team colours on a Sunday morning, it symbolises the pride he feels, his feeling of self-respect and self-confidence for himself and his team-mates, and it symbolises the attributes that help him to try his best. The pride he feels also creates the confidence for him to feel successful and, because of this, I have seen a change in him.

“At his lowest ebb, he wants to shut himself away, but he will still give rugby a go. This is simply because of the encouragement of his coaches who know Ellis, know his triggers, know when it’s best not to give him too much information to process, when to leave him alone, yet still make him feel included. It’s like a safety blanket.

“Support from his coaches and the actual physicality of rugby has contributed to enabling Ellis to become this amazing young man that we are all seeing him develop into. He shows true sportsmanship towards the opposition, he’s a good teammate and shows respect to everyone involved. I wholeheartedly believe this is because there is a place for him within rugby. Rugby pushes his limits in the right way and a way that is supported. It is character developing. People with autism are literal thinkers, and sticklers for rules, and sometimes Ellis can’t verbalise his disappointment in an appropriate manner. However, with the help and support of his teammates, his coaches, and us, his parents, he is able to bring it back from the brink and come back stronger on the pitch.

“He thrives on rugby’s routines and laws. The five core values of teamwork, respect, enjoyment, discipline and sportsmanship have become a way of life, helping to bring the consistency he needs. Seeing Ellis develop into a kind, respectful hardworking young man, who finds enjoyment in the things he loves, as well as developing his self-discipline and self-regulation in difficult situations, is heart-warming.

“Rugby has helped Ellis to come to terms with the fact that life is not always going to go to plan, that it takes hard work and commitment to get where you want to be. He is currently facing a lot of difficulties but is a young boy tackling life, meeting challenges head on, and succeeding in dealing with them, and we couldn’t be prouder of him."

“Rugby has given him an identity. With Littleborough RUFC, he is a player, rather than being branded ‘the naughty kid’. It has given him a true sense of belonging in a kind, loving community, that isn’t just club based, but across the whole rugby community. It gives him a sense that he belongs on that field with the neuro-typical children, and that he is no different from them, he is part of a unit, a family with one common interest…rugby.

Younger brother Isaac, who is eight, is also benefitting from rugby at Littleborough. He has a dual diagnosis of autism and ADHD with sensory processing difficulties, affected by being in a rugby crowd. Lisa says the family is finding a balance which meets Isaac’s sensory needs, without overstimulating him, as he develops social skills. The laws and expectations in rugby are tremendously helpful with his autism and the physical outlet of running around with a rugby ball releases excess energy.

Both boys have gained a great deal from being part of the rugby family and says Lisa; “So all the amazing coaches out there, please remember that you may be the only positive role model in young players’ hectic lives, and you hold that key to unlock their true potential…without perhaps even knowing it.”