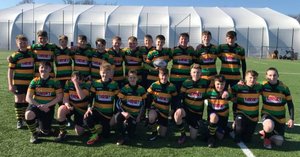 Littleborough Under 14's have been causing quite the stir and firmly got the attention of the North rugby for all the right reasons.

Seemingly from nowhere, the under 14's have burst into the spotlight across the northern rugby union sphere with impressive performance after impeccable display.

This season was all about testing the boys skills, talents and character against teams of higher standard in both Cheshire and Yorkshire. They held their own, causing a stir amongst the more well established clubs: 'who's this littleborough?'

Some of those matches over the course of the reason saw stand out victories over the likes of Bowden against the odds, Yorkshire giants and engineering a remarkable come back from 24-0 down against Altrincham to win 24-42 showed the very best character and quality the squad possesses.

This was demonstrated once more as the Under 14's led by Micky Howard and Rob Hensby beat Manchester based Heaton Moor to top the group within the cup after losing to them only a week before. The semi final against Warrington proved to be one game too far for this young side, however this is the high level they have aspired to be playing against, losing to the very best.

At the Easter break the Under 14's joined the rest of the mini and junior section of the club on tour to the WelshRugbyRocks festival reaching the final. Unfortunate to lose the final in controversial circumstances still had to be the game of the season with a vociferous and large in number green army crowd cheering them throughout.

Manager Hensby gleefully boasted: “The core skills on this lot are second to none. We have tried to promote a team ethos within team and the boys are really finding their positions.”

With the incredible 9/10/12 axis in brothers Sam and Jack Bennetta and Nyall Hensby, Efan Morgan a rock at prop,Taylor, Brady Ben Russon, Michael Mills driving the team with phenomenal work rate around the park. Tom Mills and Ben Roscoe providing the much needed go forward as the main ball carriers and solid Matty Gibson at fullback, this team has all the attributes to become one of the best young sides in the North West and beyond.