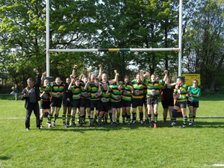 From kick off early pressure from visitors followed by good relief kick by Boro’s Fullback, Nathan Coop who quickly followed up with good tackle on fullback who caught his high ball kick. Then back with further pressure from visiting Oldham until Boro made a breakaway up to visitors 25metres area. Then Boro applied great pressure and the ball was sent out to non-other than right Winger Liam Lloyd for him to race up his wing and cross the line for the games first Try, no conversion but Boro now in the lead playing up the slope in the first 10 minutes. Now Boro on front foot showing good passing rugby till visitors got hold of the ball and kicked clear. Now Boro’s David Kearns, playing in his unfamiliar position at No8 starting to show eager and aggressive play and after 20minutes Boro brought on Chris Collins in the forwards to replace injury. Now Chris Hough putting in great attacking kick into touch in visitor’s half of the field. This was followed with high ball kick out by Visitors, well caught by Boro’s fullback, Nathan Coop. Then on further attack by visitors Boro’s Centre Three-quarter, Jack Whittles made strong tackle resulting in the Referee awarding Boro a penalty in visitors 22metres area, which was converted by Nathan Coop to extend Boro’s lead by 8points. Again, good quality attacking play by David Kearns in his new position in the forwards and excellent distance kick to touch by Chris Hough. Then on further visitors kick for positional play Boro’s Coop again hit back with quality distance kick into touch. Coming towards the end of the first half Boro’s Centre Three-quarter Adam Wayne made good defensive tackle, further penalty to Boro was missed and Hough made a good Three-quarter break with a strong run. Now half time with Boro leading 8pts to Nil.

Now into second half and Boro with advantage of slight slope saw Whittles making good wing run, followed by visitors coming back at Boro with strong run of their own and much to everyone’s surprise they eventually crossed the line for a Try of their own, up the slope and also made the conversion to make the score just 8pts to 7pts, amazing. Now game change and whilst Boro were trying to come back it was the Visitors who had all the ball and were taking play into Boro’s 22metres area. Now Boro did eventually hit back and that man, Kearns looked to have touched the ball down over the try line but the Referee didn’t give the try and gave a scrum. Boro’s Kearns was not impressed with the decision and followed up with yet another strong firm tackle, this was followed with a great distance kick to visitors 5metres area and into touch by Andy Walton. Then visitors again hit back almost at the end of the match and from only 5metres from Boro’s line the visitors crossed for their second Try of the match to take the lead 8pts to 12pts. Then soon after a three-quarter move by Boro found Captain Chris Park with ball in hand and making a smart dummy pass he broke through for Boro’s second Try and converted by Hough for Boro to regain the lead once more 15pts to 12pts, brilliant. The crowd now thought this was almost the end of the match and Boro unusually had a win but not so, right at the very end of the game the visitors crossed the line again for their third Try of the afternoon and also converted to retake the lead 15pts to 19pts followed by the Referees whistle to win the match, again not Boro’s day.

Heart breaking for Boro’s players and their supporters but for one Boro player there was success, new No8 David Kearns who worked tirelessly all the match and gave his all. making him "Man of the Match"