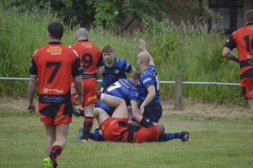 Littleborough's hopes of a league title suffered a dent as they lost 26-20 in a heated contest against Aspull New Springs.

In the hot Lancashire sunshine, Aspull who have formed an alliance with Ince Rose Bridge ripped Boro apart in an opening 30 minutes with two tries. The best of which was saw a high calibre miss pass that evaded 3 defenders and gave the full back the space to run in for a try.

Boro registered their first points of the game with 10 minutes left of the first half as Barry Rouse on his first game back from a lengthy injury lay off crashing over from close range.

This was just rewards for the effort and heart they showed in the first half but they couldn't keep Aspull at bay as in they drew blood again with a try from the number 13.

With the scoreline at 16-6 at break, Littleborough were still well in this game if they could move up the gears and keep the intensity up.

Littleborough's full back Nathan Coop drew Aspull closer and gave Boro a glimmer of hope as he collected Adam Browne's clever chip over the on rushing defence to kick through and collect the ball in time for the try line.

The home side determined not to let Boro gather momentum, put another 10 points on the visitors. They scored in the right corner with the winger before the number 13 slalomed his way in a gap through the Boro defence.

Despite the increased gap and smaller chance of victory, Littleborough continued to work the ball well and could sense blood of their own.

First Richard Taylor scored as the ball was worked to the right and he had enough about himself to get over the try line.

Adam Browne was then next to exploit weaknesses in the home side defence a try on the left hand as he strong armed his way through a non existent gap in the defence.

In the closing stages the visitors knew they needed just 1 try to seal an incredible draw from the most unlikely of scenarios after the first half. Putting huge pressure on Aspull, Littleborough pushed and probed but could not find that killer break through to leave empty handed.

Against an opposition with 5 first teamers from an NC1 team and as many as 22 available to pick from on a hot day where interchanges can make all the difference. Littleborough did magnificently with a bare 13 after Robinson had picked up a nasty lip injury and could have gone to win the game had the match been over 90 mins, such as their dominance in the last 20 mins of the second half.

A special congratulations and appraisal goes to young Mason Wild, who made his senior rugby league debut on the wing. Despite getting hard in his first he  put together a very assured and strong performance.