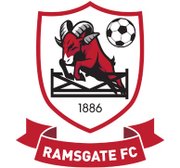 Note: Postponed from Saturday due to the passing of Her Majesty Queen Elizabeth II, this match against Ramsgate took place three days later than originally scheduled. Before the game both sets of players and all the supporters at the Sportsfield took part in a minute's silence, followed by the playing of the national anthem: God Save The King.
*
Once under way, Josh Short’s first-half goal proved the difference as Littlehampton Town were victorious in their first-ever Isuzu FA Trophy tie. Short’s superb chip midway through the first half gave the Golds the edge over fellow Isthmian League South East side Ramsgate – who ended with ten men after Ben Fitchett saw red late on.
The Golds’ reward for their 1-0 win is a trip to Isthmian Central side Hanworth Villa on Saturday, September 24th in the Second Qualifying Round.
In their first game since Bank Holiday Monday, the Golds had the best of the chances during a frantic first period.
Joe Benn fired wide after good work from Kyle O’Brien before the striker couldn’t hit the target after being played through on goal.
It wasn’t all one way traffic though. Leon Redwood saw his shot turned away at the near post by James Binfield before the Golds should have gone ahead after twenty minutes.
Benn flicked Marshall Ball’s ball forwards into the path of Dion Jarvis, but despite being through on target his effort didn’t trouble Josh Bexon in the Ramsgate goal.
Chances for the Golds were really starting to mount up, as Benn fired a long shot just wide of the post before the breakthrough finally came after 26 minutes.
Short won the ball high up the pitch and after exchanging passes with Benn, he clipped a superb chip beyond Bexon and in off the inside of the far post.
Opportunities kept coming for the hosts, with Bexon doing well to deny Short a second goal before Jarvis fired wide.
However, it wasn’t all Littlehampton. Jerald Aboagye was given room on the right to lift the ball in and he picked out the run of Atkins, but his bullet header was well held by the diving Binfield.
The second half proved little in the way of goalmouth action, with Ramsgate searching for an equaliser but without really testing the Golds keeper.
It was actually Bexon who had to stay alert just before the hour mark – the visiting keeper out well to save at the feet of Benn.
And the Rams stopper kept his side in the game midway through the second half when he made a fine double save – saving from Short and then sub George Gaskin on the rebound.
The visitors were then reduced to ten men with twelve minutes to go. Short kept the already booked Ben Fitchett at arms length as he broke down the right, before he was taken down by the winger who saw a second yellow and was sent off.
After so long without a game, Littlehampton Town travel to Haywards Heath on Saturday before a local derby with Chichester City at the Sportsfield next Tuesday night.
Share via
FacebookTwitter
https://www.pitchero.com/clubs
Recent news