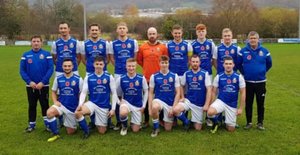 Builth Wells started this season where they left off last, lifting the inaugural Summer Cup which pitted last season’s League and League Cup Winners against Llandrindod the runners up in both competitions.

A young Llandrindod side started the first half brightly and edged both possession and territory for the majority of the half, but failed to test the Builth keeper. Builth played their usual more direct counter attacking game but failed to breakdown the Llandrindod defence. However, they did come closest to scoring from two set piece headers towards the end of the half one of which was headed over by Lee James, the other by Aled Jones.

Builth who will play in Spar League One this year will not have been happy with their first half performance. They started the second half with much more purpose and took control of the game in midfield as they pressed Llandrindod higher up the pitch. About 15 minutes into the second half, Gareth Jones was guilty of giving away a silly free kick after a foul on Harry Bastable about half way into the Llandrindod half.

Builth’s Gareth Hammonds delivered a high cross into the box which was completely misjudged by goalkeeper, Adam Wright and found its way into an empty net, much to Builth’s delight. Shortly after the Builth goal, a Neil Davies break from midfield was brought to an abrupt end by a mistimed tackle from Gareth Jones and he duly collected his second yellow card and early shower from referee, Andrew Mills. Llandrindod then made a number of substitutions and a second red card of the night soon followed as Daniel “Miff” Smith received his marching orders after an altercation with Builth player manager, Jason Samuel.

The last twenty minutes were an uphill struggle for the remaining nine men but credit to them that they continued to work hard despite the clear signs of tiredness. Builth eventually broke down the Llandrindod resistance and mustered a second goal with five minutes to go when Phil Draper was played in down the left and he lifted a neat finish over Adam Wright.

Builth who are very well organised will compete well in the Spar League One, however, they did find it difficult against Llandrindod particularly in the first half and the turning points in an evenly matched contest were the first goal and the two sendings off.
Llandrindod can learn a lot from the game, particularly the need to ensure that they are more direct and capitalise on attacking opportunities when they are in the ascendency.