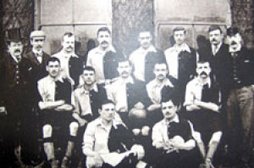 Football in Llandudno dates back to 1878 when a club, probably known as Gloddaeth Rovers was in existence probably for around a decade. The club was formed for the purpose of providing activity for cricketers during their close season.

SA full international Wales v Ireland was played on the "council field" in 1898.
Llandudno were founder members of the Welsh National League (North) in 1921 and were champions in 1923 and League Cup winners in 1930. The club won the N.W.C.F.A.in 1926 and the North Wales Amateur cup in 1929.Controversy struck the club in 1931 when the F.A.W. instructed them to play in East Wales, which Llandudno refused and were suspended.
Llandudno were founder members of the Welsh League (North) in 1935 and remained in the league until war broke out in 1939 and the rejoined in 1945 and stayed till 1974. Llandudno were League champions in 1936 and repeated the feat the following season, in addition the club regained the North Wales Amateur Cup in 1948 and 1962, the Alves Cup in 1951 and the Cookson Cup in 1965.
The club moved to its current home at Maesdu Park in 1991 after the "council field" was used for the construction of the ASDA store in the late 1970's, now the new Parc Llandudno. The current ground was officially opened in 1991 and floodlights were added in 1994.The following season saw the erection of a clubhouse and two small stands which provide seating (covered) for 130 spectators.
The club has in the past few seasons gone under major transitions, with the addition of a new press box, built by a local lad who died while construction was ongoing and it is surely a testament to Cyril "Ciz" Williams that such a great number of friend’s were determined to finish his work and the building stands as a fitting memorial to this wonderful man. In season 2004/05 new dressing rooms were completed and they have proved to be the envy of all who have used them. New grandstands, with disabled access, are in place and the stadium now meeting the criteria set down for Welsh Premier football. The new project of putting seating from one end of the back goal to the other is now under way and when complete our ground will boast a seating capacity of 1013.