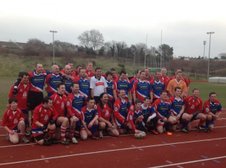 The Llanelli Warriors were formed in 1995 playing two matches against the Swansea Gladiators. Please see the history section for the full story.

1. To provide rugby and rugby related experiences for adults with learning difficulties, whatever their ability and to include them as much as possible in the game.

2. To be a ‘typical’/’normal’ rugby team, with a regular fixture list, training and a social scene. To maximise and focus on players ability making as few concessions to any disabilities as possible. To have the ‘normal’ humour and social scene associated with rugby. To not patronise players by insinuating that they are a higher standard than they are but to not differentiate between players who may or may not be disabled.

3. To publicise and promote the concept of integrated rugby. To encourage people to join our club, other similar clubs or set up their own teams.

So we want to be as good as we can be but include anyone who wants to play. Treat our team as "just another" rugby club but promote that we include players with learning difficulties.

To this end our successes and various: In 2001 we played the 1st match by an integrated team in England. We are very proud of the part we have played in the formation of The Clan and The Bumbles (and grateful that this has consistently been recognised). We also encouraged the brief existence of Saracens Brave Herts and were integral in the formation of Ability Rugby International.
As well as playing 12 plus fixtures a season we hold an annual 7s and touch tournament. We have made various tours to England, Scotland and New Zealand. We have a regular trip to Cardiff during the 6 Nations, hold a fund raising day for local charities and run a monthly disco. On the one hand we would like to tell you that members of the Warriors have; won the Welsh Cup, been capped for Welsh Students, Welsh U16s & Welsh U20s. More importantly though, several ‘disabled’ players have gone on to play for local villages.

The club is a wholly dependent entity with no external funding and no set allegiance to any other club. Burry Port have provided a home base and the club is indebted to them and the small group of volunteers who support them. All sponsors are attracted to the club directly.

For those considering joining the Llanelli Warriors:

You will be encouraged to play to the best of your ability and helped to develop rugby skills and understanding.

You will be given the opportunity to play in one of the toughest, but team orientated sports around.

You will have the opportunity to travel around the UK playing/watching rugby, sometimes further.

You will be able to immerse yourself in rugby culture: the banter, teasing, dedication, camaraderie, singing, dancing, eating and drinking.

You will be able to join in with the fundraising events, presentation nights and discos.

You will not be patronised or taken pity on, you will not be treated like a child. You will make friends, get out and about and find new experiences.

This applies to all members - regardless of if they have a learning difficulty or not.

If you fancy any of this - or want to get involved off field - helping make this happen, please get in touch (email recommended)