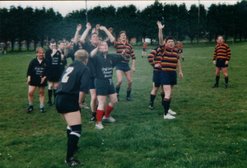 1. History of the Llanelli Warriors RFC

The Llanelli Warriors are a Challenge rugby side who include players with learning difficulties.The team was formed in 1995 to represent the Heol Goffa SAC, a day centre for people with learning difficulties. Some of the centre staff played rugby for a simialr team in Swansea, the Swansea Gladiators, and challenged the centre to raise a team. So in the best traditions of Llanelli - Swansea rivalry the West Wales Warriors met the Swansea Harlequins (name changes came soon after). The 1st match at Gorseinon RFC resulted in a draw and the Warriors managed to triumph in the re match at Stradey Park (on the Llanelli Wanderers pitch). The winners took possession of the Challenge Shield and this tradition was continued every time the sides met.Captain:Raymond Millet

The next season saw a further rematch, this time on the main field at Stradey. The game was played under lights, refereed by international official Robert G Davies and Craig Quinell made the after match presentations. The match was a high scoring 32 all draw and much of it was televised as part of the S4C Heno programme (team picture above right featuring spectators Garan Evans and Gareth Jenkins). Although they played no other fixtures in this season the interest generated provided the impetus for the team to go 'full time'.Captain:Raymond Millet

1997/98 saw the team become independent of Heol Goffa and training moved from a patch of grass at the back of the centre, to the famous Stradey Park. 7 fixtures were played against various opposition including WRU member club Burry Port. The away fixture against the Gladiators was played as a curtain raiser to the Swansea - Llanelli match. The club obtained their own kit for the 1st time through a donation from Llanelli RFC. A creditable playing record of won 3 lost 4 was achieved and the season ended on a high when the club regained the Challenge Shield at Stradey Park. A Presentation Evening was held with Dean Gilasbey named as the club's 1st Player of the Year. Captain: Raymond Millet, Player of the year: Dean Gilasbey, Players Player: David Newson, Sportsman: Colin Talcon, Top Points scorer: Edward Williams, Most Improved: John HorwoodRecords set (include): Edward Williams - 12 points in a match.3rd season extra: http://llanelliwarriorsphotos.blogspot.com and search for "thirdseason"

2004/05 P23 W17 D1 L5
The club celebrated its 10th season with a 3 match tour of New Zealand where they followed the Lions whilst winning their own matches including a 'test' match against the only similar team in New Zealand - The South Auckland Kiwis. They recorded 3 victories under tour captain Dai 'Posh' Edwards.
The season also saw the Warriors play their 100th fixture and players David Newson and then John Horwood became the 1st players to make 100 appearances for the club. The tour was featured on NZTV and S4C programme Hacio also featured the team. An extensive article on the team in Rugby World Magazine helped inspire the Saracens Brave Herts team to become the 1st challenge rugby team in england. Warriors help Pantyffynnon celebrate their new floodlights where Jonathan Kerr scores 3 tries a feat he repeats twice before Jonathan Jones sets a new club record with 4 in one match. This comes with a new record highest total as the Warriors beat Crosshands' Kwik Save 70-36. Jon Kerr set a match records with 23 points against an Opposition Select XV.
Captain: Colin Talcon, Player of the year: Simon Jenkins, Players Player: Jonathan Kerr, Sportsman: David Edwards, Top Points scorer: Jonathan Kerr, Most Improved: Tony Whittaker, Other records set: Rhys Bersley scores drop goal. Jon Kerr scores 15 tries and 134 points in season.10th season extras: http://llanelliwarriorsphotos.blogspot.com search "tenthseason"

2005/06 P12 W9 D1 L2
Club remain unbeaten at home for the 1st time and also played their 50th match at Stradey. They host their 1st touring side, integrated side the Saracens Brave Herts and beat them 41-17 to claim the CMG cup. This is followed by a rare away win to claim the Challenge Shield from the Swansea Gladiators and coupled with their summer win over the South Auckland Kiwis (who had previously beaten Australian and Japanese opposition) they were able to claim the tile - best Challenge rugby side in the world.
Over the summer former Warriors full back David Spriggs passes away in his sleep. David Played his final match against Burry Port Classics and although illness forced him to retire he stated he hoped it would be temporary. He held numerous club records and had also coached the side. Amongst various marks of respect the Warriors retired the No15 jersey and in place of the Challenge Shield the Gladiators put up the Dai Spriggs Memorial Shield. See also entry in Past Players Section.
Captain: Roger Thomas, Player of the year: Roger Thomas, Players Player: Simon Jenkins, Sportsman: Chris Spriggs, Top Points scorer: Simon Jenkins, Most Improved: David Edwards, 11th season extras: http://llanelliwarriorsphotos.blogspot.com and search for "eleventhseason"

20010/2011
10 fixtures played with 8 victories including the 1st match against Bradford and Bingley Bumble Bee Barbarians (integrated team from England) which was played at Parc y Scarlets, thus winning the H Bomb Trophy.
The club adopted New Dock Stars RFC as home base and only lost there in the final game of the season to the Ambulance Service.
Captain: Simon Jenkins, Player Of the year: Darren Pollitt, Players' Player: Colin Talcon/Simon Jenkins, Sportsman: Derrick Morgan, Most Improved: Rhydian Williams, Top Points: Simon Jenkins

2011/2012
12 fixtures with just 3 reverses, the season started off early with an excellent 'Help for Heroes' fundraiser against 14th Signals. The club made its 1st visit to Bradford for the H Bomb Cup under tour Captain Rhydian Williams. Burry Port produced the Origin Cup to reflect the support the Warriors had had at their establishment. The season also saw the re-establishment of the club's 7s and touch rugby tournament in Burry Port where it has now become a fixture. Eric Horridge was named player of the tournament which was won by Bone-Crushing Ballerinas.
Captain: Darren Pollitt, Eric Horridge became only the 2nd player to earn Player Of the Year and Players' Player in the same season. Sportsman: Chris Hancock, Most Improved: Ryan Morgan, Top try scorer: Simon Jenkins
The summer saw the passing of the club's Chairman and former Captain Dai Newson. Dai played 109 times for the Warriors – 108 consecutively, never missing a game in 10 seasons. He was Captain for 4 years and regularly the top try scorer. He was the 1st player to make 100 apperances.

2012/2013
16 fixtures were played with 11 wins and two draws recorded; the team was unbeaten at New Dock. The H Bomb Cup was retained and the Warriors participated in the 1st TRI Unions Cup in Scotland, providing the opposition for The Clan's 1st ever match which the Warriors won by a single point and secured runner up spot. The Warriors played the Swansea Gladiators for the 1st time in some years and won a close match at New Dock Stars. Gwl@d RFC produced a cup ("Charity" cup to reflect the fundraising held around the fixture) which the Warriors won. The Origin Cup and Anniversary Cup were retained. The Warriors won the touch rugby section of their tournament.
Captain: Eric Horridge, Player Of The Year: Graham Mossa, Players Player: Ryan Morgan, Most Improved: Gareth Ladd, Sportsman: Jamie Evans, Top Try Scorer: Simon Jenkins
In the close season Warriors linesman and general rugby legend Lewis Jones passed away. Many sides observed a minutes silence at their next fixture including The Bumbles and the Scarlets. A memorial fund raised enough for a bench to be bought in his memory with over £1000 donated to the Warriors. Tributes came from many notable people and a packed funeral was held in Kidwelly.

2013/2014
15 fixtures played (including an exhibition match where the club was able to field two teams) but 8 were lost including a very tough H Bomb match in Bradford (Andrew Davies - Captain) and a visit from The Clan. A memorial match was held at Furnace RFC for Lewis. The club produced a nude calendar to raise funds. Charity Cup and Anniversary Cup were retained; the club was runner up in the TRI Unions Cup (Captain Nathan Lawson) but lost the Origin Cup for the 1st time. Graham Mossa was named Player of the Tournament at the Tri Unions Cup. Simon Jenkins equals Dai Spriggs record of 5 penalties in a season. The club played their 1st French opponents: XV De L’edre. The club began an annual Xmas match with Reds taking on Blues. The Warriors won their 7s tournament, presented by Wales international Richie Pugh. The Club played its 200th fixture defeating New Dock Stars. A regular monthly disco is started.
Captain: Graham Mossa, Player Of The Year: Richard Evans Players' Player: Darren Pollitt, Sportsman (for the new Lewis Jones Award donated by his brother Tom): Mark Lewis, Most Improved: Andrew Davies Top Points Scorer: Graham Mossa

2014/2015 P 18 W11 L7
11 of 18 fixtures are won including Challenge Shield (Gladiators), Charity Cup (Gwl@d), H Bomb (Bumble Bees), Origin Cup (Burry Port) and Anniversary Cup (Cefneithin). The club made its earliest ever start to the season with a 1st appearance at Beach Rugby Wales in Swansea, runners up to the Swansea Gladiators in the Fair Play Shield and with games against Blaneau and Cae Maen Giants in August. Provided the opposition for the Salopian Stags (mixed ability) 1st ever, and Swansea Vikings (inclusive) 2nd match. John Horwood played his 200th match in the victory over Tumble. The club moved from New Dock Stars RFC to Burry Port RFC.
The Warriors won the 1st ever Ability Rugby International Championship played for by all integrated sides.
Captain: Andrew Davies, Player of the Year: Ben Winstanley, Players’ Player: Liam Tobias, Sportsman: Richard Evans, Most Improved: Steve Rees, Top Try Scorer: Jamie Evans.