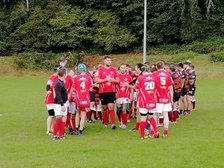 A 2nd defeat for the Warriors but some positive signs

A tough day for the Warriors at the top of the Swansea Valley as they went down to an Abercrave side enjoying the sunny conditions.

The Warriors arrived later and “turned up” even later with a surprisingly flat start that saw them concede two early tries.
There was an alarming tendency to slip off tackles early on but a definite improvement through the game. The backs looked sharp throughout making some neat breaks and showing plenty of skill but perhaps a little naive in where the game was played.
The forwards also did well generally with Lawson and Haines outstanding and Crawley continuing to improve. In the 2nd half Duke and Grinter did well but they were outshone by Yanis Whiteley. Playing his last match before moving away, Whiteley again covered the field felling opponents and saving at least one score.
Whitley was named man of the match in front of wings Anthony and Day who proved a pacy threat on each wing.
Abercrave’s strong running provided most of their scores as they were happy to run from deep but they showed good hands on a couple of occasions when the Warriors defence pushed them.
It made of an entertaining match which both sides seemed to enjoy and a good platform for the coming season.

So once the Warriors convoy had wound it’s way past a blocked up M4 and into the Swansea Valley with Ben Win the only one lost in traffic, the home team had had a full run out of warm ups. Meanwhile the Warriors were still trying to find kit (Simon Day eventually found his boots….in his kit bag).
Yanis had a typical performance, invading the pitch to talk to Gwilym, tackling everything and generally being hilarious!
Tomos Hall celebrated his birthday while Sideshow Tom and Nathan Murphy made their 50th appearance. Jon K had obviously done the celebrating for this the night before. Nathan Lawson played despite a burnt hand and John Horwood started his 24th season at the age of 60 and a month.
The Welsh game passed without incident (or a win) and whilst Lloydi and the kids headed out on the town, it was back down and pack for tour – where ever that goes...