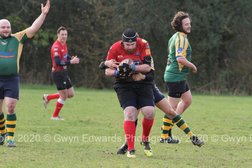 It may have been the start of the 6 Nations but the Warriors made over reasons to celebrate and they scored 6 tries in this classy encounter.

James Anthony claimed two touch downs and a conversion to top the points chart but the Man of the Match Award going to 2nd row Tom Ashour, showed where this match was won. Always a side that has looked to run the ball, the Warriors are adding a disciplined edge up front epitomised by hard working locks Ashour and Crowley. It was they who ensured the big carries by Dai Haines and Chris Davies didn't go to waste and put the backs on the front foot.

That wasn't to say it wasn't a fast and loose game though with both sides spinning the ball with abandon. Anthony enjoyed the hard surface and it was he who opened the scoring but Cefneithin soon hit back with Aled Evans skipping through. The home team should have gone ahead when they broke through mid field but fumbled the ball on the line to let the Warriors off the hook
The next try would have pleased the Warriors coaching team, the defence pushing hard and forcing a mistake as Cefn tried to run from their line. Centre Kearney stealing a score.
The Warriors then scored a try from kick off where Jamie Evans and Darren Pollitt combined over the length of the field for Pollitt to score under the posts, giving the Warriors some breathing space.

Despite the open nature of the game, neither side gave easy tries away. The young Cefneithin team showed plenty of skill and pace throughout which bodes well for the club's future. Fussell scored for the Warriors and Anthony got a 2nd but Jay Willingham rounded off a lovely move from the home team and when Matthews also scored they were back in touching distance, 22-29, as the game entered the final quarter.

The Warriors redoubled their efforts and eventually young flanker David Townend forced his way over to seal the win.

In the clubhouse afterwards the hosts celebrated 21 uninterrupted years of the fixture with a sizable donation to the Warriors who will be attending the Mixed Ability World Tournament in Cork in the summer.

A fun day on the field (as ever) with no less than 4 nominations for Dick of the Day. Some good performances across the park with training definitely paying off.

Top singing from John and Jason, Jason & Bonar could be the new Ant & Dec with their haka, big donation from Cefneithin again, Wales shut out Italy and even the Chicken Curry 1/2 & 1/2 was top notch - you have to love the Cefn fixture.

Please vote in the poll on facebook for Dick of the Day:
UPDATE Dick of the Day Poll Results:
Jaymie Evans - dropped passes and missed touch: 7 votes
James Milgi - fell over when through for a try: 2 votes
Adam Fussy - wandered off the field just before a set move & took a tap penalty alone...knocked on: 8 votes
Simon Daydream - told not to play with an absess, played, brushed on cheek - went off, then told everyone he'd been punched: 23 votes