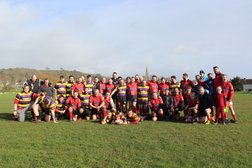 Primarily Fun for Warriors and Eddas

With both sides looking to enjoy and express themselves, this was a classic open rugby match with the emphasis on attack

For the fourth year running, the former students of Trinity Primary Education assembled to play rugby against the Llanelli Warriors. As ever they looked to play an open brand of rugby that they enjoy and with the Warriors also favouring the wide game there was plenty of flair on show and nearly 100 points scored.

It was a ding dong battle with the lead flipping back and forth. Neither side getting sustained momentum with scores often from long range rather than concerted build up. It made for a frenetic but entertaining match and some spectacular tries.
No surprise that one of the main benefactors was Warriors wing James Anthony whose broken-field running has been a huge weapon for the Warriors this season. With the game almost always broken up he was able to show the full range of abilities in defence but especially in attack. It was his running late on that saw the Warriors come from behind in the last 10 minutes. He had already scored two tries, one owing more to soccer skills as he dribbled on from halfway, before the game entered the last quarter. A breakup the wing made a try for prop Luke Pearse and finally a searing run from his own 22 saw him beat 4 defenders and cross under the posts to make the result safe, just when it looked like the Eddas might triumph.

He wasn’t the only star in an exciting game though. Joshua Congreave opened the scoring for the Eddas as they got going quicker, but Johnathon Kearney got the Warriors going, and had a fine game overall. The Warriors looked sharp at half back where Ryan Randall ran things effectively brining the backs into play and scoring himself and both debutants Wisby and Nut got on the scoresheet.
The Warriors were spoilt for choice with kickers as Pollitt, Grinter and Anthony all bagged two conversions. This helped them edge ahead as Eddas Ken Bitson struggled to find his range and it took a change of kicker to Jason Jenkins before they added any extras. Bitson did score a try though, quickly followed by the lumbering Steffan Arthur who strode over for the pick of the visitors’ efforts.
Unsung heroes for the Warriors included the busy Lloyd Crawley and veteran John Horwood. The Eddas were indebted to the busy James Roberts, the strong running Steffan Davies and the hard-working Dion Mitchell-Lewis. The Latham brothers put themselves around and enjoyed a good battle with Warriors Adam Fussell and Lee Rowlands.

The first half was good, the Warriors leading 19-15 at the break, but the second half got better. Another 57 points after the break, The Eddas got themselves in front 39-38 with 10 minutes to go but then Anthony’s antics really began, resulting in 14 late points to seal a Warriors win.

Another fun match against the Eddas with much inter team banter all expertly supervised by Colonel Saunders as ref. Luckily the storm held off and the weather was pretty perfect. Obviously we are all a bit disappointed that former Warriors Ken Bitson got on the score sheet (though his kicking was hilarious). It was no surprise to hear him tell us later that he has signed professional contract with the Amman United – what would be a surprise is if it was true!
Moving swiftly past the Welsh game…the initiations were good, if a little long…….. and NOONE needs to see the Daydream 100 without clothes on.
Couple of good debuts as well and congratulations to Jamie who came a career best 3rd in Dick of the Day behind Tony 1 second and the DD100 who couldn’t catch anything
No reports from the Eddas night out but all apparently survived so, until next year…