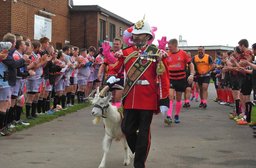 The Llanelli Warriors were very proud to be involved in the birth of a new Mixed Ability Rugby Club on the weekend.
The Port Talbot Panthers held this mixed ability festival after the Aberavon Green Stars Club were inspired having played fixtures against the Swansea Gladiators and Llanelli Warriors.
They had been holding training sessions at different clubs and under the watchful eye of British Lion Richard Hibbard.
The Warriors of course marked this prestigious occasion with the usual chaos but at least those there early got 1st bibs of the lush new RCS kit ?

For this festival the Panthers had invited, not only the Gladiators and the Warriors but also Celtic Rail Barbarians. Off field Sienkin the goat and the Panthers Pink mascot were in attendance, along with renown WRU comedy duo Carew & Greggs.

After forming a guard of honour for the Panthers, all the teams were introduced to the local Mayor before the singing of the National Anthem.

Thankfully after all this shenanigans most of the Warriors (even the Days) had found their way to the ground plus we had a rare appearance for the Mavrick himself: Gareth ‘Pies’ McKibbon.

Having cooled off completely, it was over to the side field to play Celtic Rail. As at the Penlan 10s, Celtic proved stiff opposition and quickly went into a 10 point lead. The Warriors did get themselves into some sort of shape and remembered to play some rugby. They did themselves more justice in the 2nd half but CRB never looked like losing.

Next it was on the the main field and a match with the Panthers. A couple of soft tries were conceded but Kearney and Dirty scored for the Warriors.
The major mistakes were Day Daydreaming when he should have been chasing a kick and opting to play uphill against the wind only to be told there was no half time and no change of ends. 15 all was a nice result though in our first contact with the new team.

Back over to the side field to face our oldest friends, the Swansea Gladiators, John Horwood starting as he had forgotten to come on in the Panthers match along with Ben Win who had finally turned up. Going the other way was Dan Grinter who had taken a knock to the head.

A close game the Gladiators had a young jinky jinky who made a couple of tries for them but the Warriors were ahead as time was closing in. Unfortunately Lloydipop took a bang and whilst some of the Warriors went to him, some of the Gladiators went to the try line. Again - no complaints about a draw which suited the spirit of the day. Special mention for Pies, Pearse, Duchess and Horwood who helped out and injury ravaged Glads team (whilst Polly had a pout).

With Lloydi & 1 Dap in the local hospital the rest trooped in to the clubhouse for speeches. The Panthers had a lovely trophy for each teams man of the match, Nick Dcruz claimed the Warriors prize with 3 impressive performances though he was pushed all the way by Dainosaur and the Tominator.

All 4 teams and the mayor gave good speeches about the spirit of rugby and importance of the day. The Warriors were especially appreciative of Tony Gemine’s kind words about their encouraging others.

Finally we left, leaving Youssef and a big plate of sausages and listening to this guy: Wesley Thompson https://www.youtube.com/watch?v=1IF0WPH2CcQ

Congratulations to the Panthers on running a fantastic occasion, we were proud to be part of the birth of mixed ability rugby in Port Talbot.