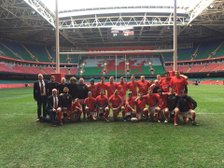 The Warriors came from behind to claim victory over the Cardiff Chiefs with a late Simon Day Scorcher sealing the win.

Cardiff Chiefs made their 1st full visit to Burry Port with a strong squad but were edged out of the result by a resilient home team.

Both teams were able to field from strength and it made for a quality rugby match. The Warriors welcomed back experienced 2nd row John Horwood who made his 290th appearance for the club.

There was a dream start for the Warriors when they swept down field in an early attack. Initially forced into touch just short, an error at the line out allowed Gwilym Lewis to poach a try and start the scoring. The Chiefs got some flow into their game and produced some sharp rugby of their own. Desperate defence stopped a sweeping move but the Chiefs showed good ball retention and worked the phases until a surge up the left flank got them a score.

Time with the slope was slipping away from the Warriors, despite being camped on the Chiefs line they were struggling to break through the thin blue line. They eventually forced a penalty and spun the ball across the field for James Anthony to dot down in the corner.

The lead was never likely to be enough and with the slope the Chiefs put together some good phases to work their way down field. Although the Warriors stood strong, eventually they were powerless to stop a snipe from the base right under the posts, veteran Paul Morgan popped over the conversion to give the visitors the lead.

From here the Warriors tended to have the upper hand but couldn't get across the line. All the time the Chiefs looked like they might break away and extend their lead. The Warriors even dropped the ball over the line before debutant scrum half Lloyd Herbert got outside his marker and made it to the line. Anthony added the conversion, 17-12 as the game entered the final quarter.

The Chiefs desperately tried to break down field and it was hearts in mouths for the Warriors several times but with the game opening up, they were more opportunities. The best was saved to last when Simon Day took the ball 40 meters out, rounded two tacklers and held on as the cover reached him on the line. Anthony again improved the score which was enough for the Warriors to triumph.

Both clubs had plenty of positives to reflect on. For the Warriors a much improved performance up front where Crawley was at times outstanding, Will Browne and Colin Tacon showed some nice skills and Luke Pearce worked hard all game. Add in two solid debuts from Herbert and Ryan Randall it made for an excellent afternoon.