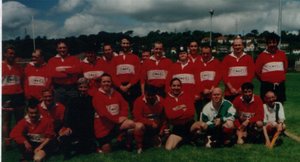 The White Lion pub in Felinfoel formed a team to raise money for one of their regulars. Despite a strong presence from the local rugby club everything thing went the Warriors way and they scored their highest total to date.

Full match report in the photos section - taken from the Llanelli Star.

Ed McVicar was to the fore in the pack, even recovering from a very heavy hit early on, whilst Richard Griffiths and Wayne Comley excelled in the backline. A large crowd were treated to an exhibition of running rugby on a perfect sunny day.
Jeff 'Pies'Thomas was eventually 'persuaded' to make a debut while Neil 'German' looked to be the happiest rugby player alive when he scored following a run of Phil Rudall, until Adrian Payne scored at the death.
The highlight for the White was seeing Chris 'Karate' on a rugby pitch although he didn't go so far as to show his legs. The day made a decent so much money that eventually the Warriors got a donation back. A large crowd returned to the White but it slowly dwindled as it pub crawled towards town.

Some of the White Lion team had been "hydrating before the match and it took a couple of warnings before the Lion's front row got the hang of uncontested scrums. After that it was a fun run out on a lovely summers day. The Warriors' program sales went towards teh cause but so much money had been raised that in the end the Warriors were later presented with a cheque themselves.

This remains the Warriors biggest winning margin to date (24.1.21)