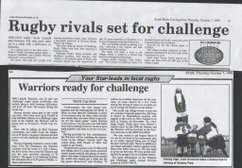 The World Cup was in full swing but the Warriors had yet to play a game and struggled to raise a team for this encounter.

The day didn't start well with Team Manager Craig Thomas failing to secure a mini bus. He did say that he had booked the bus from CCC's Maes Lleidi Care Home but when Gwilym arrived there - it was the 1st (severe) Manager Christine had heard about it. Oneway or another the bus was secured and even though the Warriors were quite depleted (too many people on the lash for the Wales v Japan match) a 9 seater bus was still too small.
With a relaxed attitude to saftey and some cars, 15 Warriors eventually got to St Helens. It was a typical squally wet day and so any ideas that punters might venture out of the World Cup Village Marquee to watch the game were somewhat ambitious (there had been some pre-match hype - see photos). Not sure there were double figures in the tent and only one person very briefly stuck his head outside.

The Glads were very well organised at the time, under coach Garfield and had already played a few matches.

The match report is in the photos if you want to read - reports of the Gladiators winning were always a bit slower off to the press room and this one never made it. As ever, it's written very much through Warrior tinted spectacles and gritted teeth. It's a fact though, that the Warriors managed to frustrate the Gladiators and kept the score close throughout. Dai Spriggs was selected Man of the Match by the Gladiators who professed to being very impressed with his bravery in defence. Almost inevitably, he also kicked the conversions so it was well deserved.

Later in the bowels of St Helens, Wales saw off Japan at a canter, 64 - 15.
This effort summed up Japan's day https://www.youtube.com/watch?v=s0-3lwah9J0&feature=emb_logo
So with a couple of beers the Warriors spirits rose somewhat and at least season 5 was underway!

Here's what was written previously with a comment from Debutant - never played again, Dylan Higgon

The Warriors 5th season begins...
The World Cup arrived and The Warriors and Gladiators were determined to make the most of it. This match was played at Swansea RFC's World Cup village on the day of the Wales v Japan group match.
First we had to get there though. A mix up with buses meant that a very full 9 seater 'bus' eventually made it's way over Louchor bridge.
The hastily put together Llanelli side played above themselves with 1st Lee Rowlands latching onto a loose ball and later fly half Dylan 'Twinkle' Higgon scoring a cracking try under the posts with Dai Spriggs converting both. At time down to 13 players the Llanelli team were under the cosh for most of the second half but were still within a score of the Gladiators until the hosts secured one overlap too many and Paul Rowley crossed wide out.

The poor weather on the day put paid to anyone coming out of the comfort of the marquee to watch but it's always good to play at St. Helens. Afterwards the teams spent a pleasant afternoon watching Wales see off Japan in the world cup.

A great day we tried our best St Helen;s is nothing like playing on Stradey, love to play again!LOL
Dylan "twinkle" Higgon