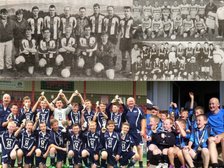 Last week, the town of Llanfair was devastated to hear that Andy McVeagh had sadly passed away at the age of 56.

Andy was Llanfair through and through, representing so many teams in various sports and events over the years, none more than the football club, which he has played for, coached, helped as a steward and supported for many years.

Andy was part of Llanfair Wanderers, who were formed in 1989/90, to rival the already present Town side. Andy along with a number of local youngsters enjoyed t