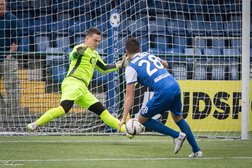 Llanfair knocked out by the Wingmakers

It was always going to be a tough test against the Cymru premier side who won the Cymru Alliance last season.

The game didn't begin well when Paul Griffiths had to be substituted off after only 6 minutes due to injury, replaced by Ryan Evans.

It then got worse on 9 minutes when a James Hooper cross was headed into his own net by Gethin Stephens.

Llanfair defended well for the rest of the first half and Danny Foulkes pulled off a good save to deny an Alex Darlington free kick.

Early in the second half, after only a minute, Airbus doubled their lead. A goalmouth scramble was put into the net by Steve Tomassen.

Darlington then went close twice within the space of a minute before Danny Foulkes failed to claim the ball from a corner, and Wrexham loanee Matty Sargent drove into the roof of the net from 18 yards on 61 minutes.

On 74 minutes, after Danny Foulkes had produced a double save to deny Joe Palmer, Darlington finally got a goal with a good strike following a free kick.

Late on, Matthew Bumford intercepted the ball high up the field but failed to score whilst one on one.

A valiant effort against top opponents. The league season starts this Saturday, at home to Ruthin Town.