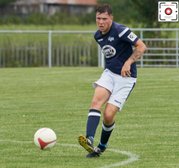 Llanfair out of Welsh Cup

From the off, it was clear that Penrhyndeudraeth we’re going to be tough opposition as they dominated the first 10 minutes, putting Llanfair’s defence under pressure, and not allowing Llanfair to play football.

That pressure paid off when Tomos Smith found space at the back post to finish well to put the visitors in the lead on 11 minutes.

Llanfair settled into the game and almost equalised but a header was cleared off the line. But it was the visitors who scored next to double their lead, through Cai Henshaw, who finished well, low into the net from the edge of the area in the 32nd minute.

Llanfair missed two clear chances before the break to get a goal back. First Max McLaughlin from close range had his effort brilliantly saved by Morgan Jones. Toby Evans missed another good chance after racing through clear on goal, only to be denied by Jones again.

After the break, Llanfair improved and kept an attacking momentum, pulling a goal back through an own goal off a Karl Seliaerts corner.

Just as Llanfair looked like getting back in the game, defensive errors led to a 3rd Penrhyn goal, Tomos Smith again, finding acres of space at the back post to make it 3-1.

Llanfair made three substitutions which have Llanfair the momentum to chase the game late on. Substitute Dylan Hillier came close to scoring, after a brilliant mazy run but the finish was saved by Jones.

Llanfair created a number of half chances before Josh Astley made it 3-2 with a neat finish from close range off a low Dylan Hillier cross.

In the late stages, Ben Jones had a header cleared off the line and Nyasha Mwamuka had a shot well blocked but Llanfair failed to find an equaliser.

A disappointing blow going out of the Trophy and Welsh Cup in consecutive weekends but it allows the team to focus on the league, starting with another home game on Tuesday against in form Dolgellau at 6.45pm.