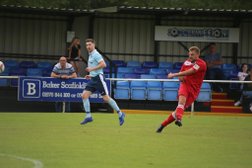 A great, battling away win on Saturday as Llanfair came away with a deserved 3 points after a great shift from the lads.

With only 10 regular first team players available, Owain Jones, Tom Bowen and Rhydian Morgan (debut) were given their chance.

Both teams and supporters remembered the recent losses of Andy McVeagh (Llanfair) and Mark Weeks (Rhos) with a minute silence before kick off.

It didn't start too well for Llanfair when the home side took the lead after 15 minutes when James Haynes finished neatly after escaping the defence.

Llanfair replied instantly though with a Josh Astley header from a Max McLaughlin corner on 16 minutes.

On 29 minutes, good pressing by Karl Seliaerts won back the ball before he was fouled in the area for a penalty. Josh Astley stepped up to make it two for the day for him.

In the second half, Max McLaughlin scored straight after the break. Ben Jones and Josh Astley combined well to set up Max who finished well, low into the bottom left.

On 63 minutes, Rhos pulled a goal back with a 25 yard screamer by Aled Parry.

Llanfair held on at the end. Rhos had a goal disallowed before Mark Richards pulled off a brilliant save at the death to help earn 3 points for Llanfair.

Machynlleth next on Friday, 7.45pm ko.