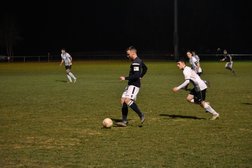 Llanfair bounce back with a comfortable win

After two league defeats, Llanfair were back on winning form with a 5-0 win over Welshpool on Friday night

Llanfair took the lead on 38 minutes. A corner was parried by the keeper to Matt Spencer, whose header was brilliantly saved again only for Ben Jones to head in the rebound with a powerful effort.

In added on time, Llanfair were 2-0 up. A brilliantly worked move down the left involving Jake Mann and Josh Astley led to Karl Seliaerts picking up the ball just inside his own half before threading a brilliant pass into the path of Jack Orbell. Jack did well, rounded the keeper but his effort was blocked on the line only for Josh Astley to pounce on the rebound to score.

In the second half, on 49 minutes, Karl Seliaerts found Josh Astley with an excellent cross towards the back post and Josh Astley finished well, lobbing the ball over the goalkeeper.

In the 61st minute, Josh Astley turned a defender brilliantly to cross for Max McLaughlin, whose header was well saved. However, Max controlled the rebound, dummied past the defender and smashed the ball home for 4-0.

Llanfair’s fifth and final goal game came via Josh Astley’s hat trick goal. A mistake by the Welshpool defender, via a throw in, led to Josh getting past the advancing keeper and tapping the ball into an empty net.

A very good all round performance.