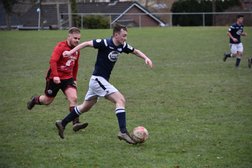 Llanfair went into the game with the hope of overcoming the defeat the day before.

But the game didn't start well for Llanfair, a mix up between defence and goalkeeper led to Taylor Wozencraft slotting the ball into an empty net from a tight angle on 4 minutes.

Llanfair gathered themselves well though and were rewarded on 19 minutes when Josh Astley scored from close range with a well placed finish.

In the second half, the game was tight when Nathan Hughes struck a fantastic effort straight into the top corner from 25 yards to put Llanfair ahead on 62 minutes.

Llanfair increased their lead on 76 minutes, when Ben Jones headed in a Jack Orbell cross from the left.

In the final minutes, Mark Richards was called into action to pull off two good saves and Llanfair held on to progress in the competition.

Player of the Match - Owain James