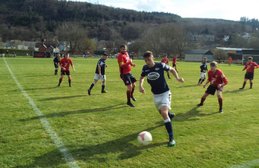 Although Llanfair have played more games, they continue to keep the pressure on their opponents with another win.

Llanfair started well and were in front after 20 minutes. Jack Orbell's effort on goal from wide left, rebounded off the goalkeeper into Nathan Hughes, who finished well from close range.

The hosts were level though on 33 minutes. A long kick by the Corwen goalkeeper sailed over Llanfair's defence into the path of Owen Cordiner, who finished coolly from 12 yards.

In the second half, Llanfair cranked up the pressure and were ahead again after 59 minutes, via an own goal by Scott Evans.

Llanfair's third goal in the 63rd minute was well worked from the back. Owain James found himself with time and space in midfield, finding Karl Seliaerts in the right channel with a brilliant through ball. Karl finished well past the advancing keeper for 3-1.

Llanfair wrapped up the 3 points in the 85th minute. Jack Orbell received a short corner from Karl Seliaerts before cutting onto his right and firing the ball home from long range with a powerful effort.

Player of the Match: Jack Orbell