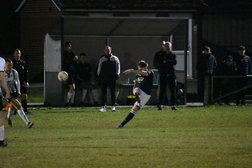 Llanfair out of Central Wales Cup

Brecon started strong and were ahead after only 8 minutes when Paul Keddle headed in a Rhys Thomas corner.

Corries went 2-0 up soon after, a whipped in free kick caused issues for Llanfair and Craig Evans tapped the ball into an empty net.

Llanfair's best chance of the half fell to Jack Orbell, who raced onto a through ball but his effort dragged agonisingly wide.

Llanfair improved in the second half. Josh Astley came close when through on goal but Brecon goalkeeper Joel Evans saved well.

Brecon came close to a third but Mark Richards pulled off a great save from a direct free kick.

Josh Astley came close again with a longer range effort this time but his effort whistled wide of the post.

Ben Jones thought he had pulled a goal back but Joel Evans pulled off a brilliant diving save to his left to deny Ben from 12 yards out.

Llanfair pushed but couldn't get past an organised Brecon who deserved their win.

Player of the Match: Jake Mann