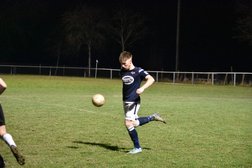 It'll be 4th place for Llanfair after a great effort trying to gain promotion, just falling short after a promising campaign

The end of the season finished with a thriller at Berriew. The hosts were 1-0 up after 24 minutes through Ed Baker.

Llanfair equalised in the 44th minute, max McLaughlin finishing a Ben Jones right wing cross but George Mitten scored after the kick off, just before half time to make it 2-1.

Early in the second half, Berriew extended their lead to 3-1, through Jonathan Jones.

Llanfair responded well though and were level through ben Jones who tapped in a rebound off a Jack Orbell effort on 52 minutes.

Josh Astley pounced on a defensive error on 59 minutes to equalise at 3-3.

There was drama in the final minute when mark Richards brought down Richard Davies for a penalty. Josh Evans stepped up for the hosts but Mark saved the penalty to his left.