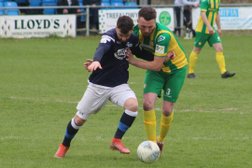 It was heartbreak for Llanfair in their final game of the season last Saturday, losing to Llanidloes in a thrilling game at Berriew

The Daffs started the game on top and created a host of chances early on. The best one falling to Clarke on the edge of the area but his powerful effort was brilliantly saved by Mark Richards, with a strong hand over the bar. Llani also hit the crossbar with a header from a free kick.

Llanidloes' dominance resulted in them taking the lead on 31 minutes through George Clarke, who bundled the ball over the line from close range. Llanfair failed to create anything significant before the break but got back into the game after the goal. An in-swinging Max McLaughlin cross was narrowly missed by the onrushing strikers and was well held by the keeper.

In the second half, the game was a lot more even. Llanfair's first big chance came in the 57th minute, Josh Astley pouncing on a poor pass by the Llani goalkeeper but his effort was well saved by Luke Evans in goal.

Llanfair were made to pay for missing that chance when Llanidloes took a 2-0 lead on 62 minutes, Daf Carruthers turned well and finished coolly into the right hand corner.

Llanfair responded well though and nearly pulled a goal back almost instantly. After a long ball forward, Josh Astley played in Max McLaughlin who when through on goal from 20 yards attempted to lob the keeper but his effort cannoned off the crossbar.

As the game was winding towards a finish, a frantic final 10 minutes entertained the large crowd watching. Max McLaughlin picked up a loose ball on the left wing from an overhit corner before playing a well worked one-two with Nyasha Mwamuka before firing the ball into the net for 2-1.

Llanfair continued to pile the pressure on and were awarded a penalty on 84 minutes for handball. Josh Astley stepped up but his effort low to the left was brilliantly saved by Luke Evans.

Llanfair's heartbreak was sealed in injury time when Elliot Jones was found free in the area before finding the net from close range.

It wasn't to be but the team put in a good performance to end what has been a good and positive season.

A season review will be posted on the website soon.

Man of the Match: Karl Seliaerts