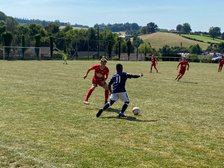 Llanfair burst out of the traps and were ahead after only 4 minutes. A loose clearance dropped to Jake Brown on the edge of the 18 yard box, who drilled the ball low and hard into the bottom left corner for 1-0.

Llanfair were 2-0 up moments later when a long kick by Lee Andrew found Richard Davies who headed the ball through to Karl Seliaerts who cleverly lobbed the stranded Rhayader keeper from 20 yards.

Llanfair missed a host of chances in the following 30 minutes of football. The best chance fell to Richard Davies whose header at the back post came back down off the bar and his rebound effort also hit the bar before being cleared away.

Nyasha Mwamuka made it 3-0 just before the break though with a neat finish after being set up by Karl Seliaerts.

The second half was very much the same, a dominant display by Llanfair.

Nyasha grabbed his second of the game on 54 minutes, controlling a Lee Andrew goal kick brilliantly to then round the keeper for 4-0.

Llanfair missed a number of chances, Nyahsa with two close range efforts saved to deny his hat trick, Karl Seliaerts with a well taken volley which was well saved and a goal line clearance denied Richard Davies a goal.

Two wins from two, a great start. Llanrhaeadr at home next, Wednesday 6.45pm in the league.

Player of the Match: Nyasha Mwamuka