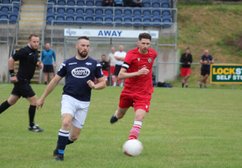 Llanfair began the game well and were in front after 12 minutes through Karl Seliaerts who followed up a rebound from a Jake Brown shot.

After dominating the first 15 minutes, Llanfair allowed Llanrhaeadr back into the game and the visitors were well and truly back ion the game.

However it was Llanfair who got the next goal, a brilliantly worked move down the left resulted in Owain James back heeling the ball for KArl Seliaerts to send in a low cross, which Ryan McVeagh steered home from close range.

Llanrhaeadr came close just before the break with a header from a free kick.

In the second half, the game was a lot closer and early on, Llanrhaeadr caused Llanfair trouble with through balls, Lee Andrew in goal sweeping up and saving well.

The game was a tight knit affair for the rest of the half without any real clear chances for either side until Max McLaughlin raced through one on one late on, only to get caught in two minds between passing and shooting, the ball going out for a goal kick.

A good win against a resolute Llanrhaeadr.

Next Fixture is Llanrhaeadr again, away in the Welsh Cup on Saturday, 2pm kick off.