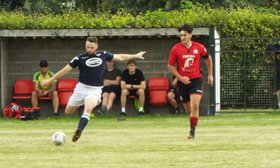 Llanfair off to a great start!

It couldn't have started much better when new signing Richard Davies fired the ball home from a Ryan McVeagh pull back after only 8 minutes.

However it wasn't all plain sailing for Llanfair. On 24 minutes Corwen equalised, Daykin scoring for the hosts, one on one past Lee Andrew in goal.

Llanfair responded well though and were ahead again on 37 minutes. From the right wing, Matt Spencer played the ball into Ryan McVeagh who chipped the ball over a stranded Corwen goalkeeper from long range.

Llanfair were soon 3-1 up through Richard Davies again capitalised on a goalkeeping error from a Karl Seliaerts cross on 38 minutes.

In the second half, Llanfair all but sealed the win on 48 minutes. Karl Seliaerts picked up the ball in midfield before advancing on goal and unleashing a powerful effort which deflected into the net.

A great start to the season. Rhayader Town at home next, Saturday 13th August 2.30pm.