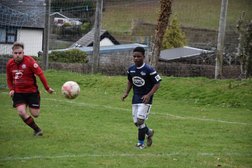 Llanfair United through to Welsh Cup Round 1

The game started well for Llanfair when Karl Seliaerts fired the ball home from the right hand side, a brilliant strike to open the scoring after only 6 minutes.

Only moments later, Llanfair were two up. A ball down the left by Jake Mann was chased down by Max McLaughlin, who took on three defenders before scoring with a well taken low shot from the edge of the area.

Llanfair didn't stop there and were 3-0 up after 18 minutes. A brilliant cross field ball by Jake Brown from the right found Nyasha Mwmauka, who laid it for Max McLaughlin to cross for Ryan McVeagh, who headed the ball home at the back post.

In the second half, Llanfair continued to dominate and were 4-0 up after 56 minutes. Jake Mann with a brilliant left wing cross, provided for Max McLaughlin to score his second.

Llanrhaeadr were reduced to 10 men on 73 minutes, Dan Kelly with a red card for serious foul play.

On 78 minutes, Max McLaughlin made it a hat trick and 5-0 to Llanfair. A brilliant cross from the right by Jake Brown found Max in the area who finished well.

The game ended on a sour note, Max McLaughlin given a red card for lashing out late on.

Player of the Match: Max McLaughlin