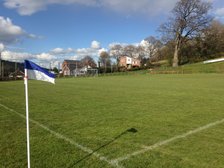 After Conwy took an early lead, Llanfair missed a host of chances to score, and will look back at what could have been.

Conwy, who were looking to get three points to avoid relegation themselves, took the lead after only two minutes when Ross Rule was played in over the top of Llanfair's defence and placed his shot into the corner of the net as he advanced on goal.

In the second half, the story was much the same. James Davies again causing problems over the top but couldn't find the target. After an hour, Andrew Hughes raced through and was brought down in the penalty area by the last defender and advancing goalkeeper but was somehow penalised for diving.

In the final five minutes, Conwy looked dangerous on the counter but a combination of Mark Richards in goal and the crossbar stopped the visitors getting a second goal.

Late on, Daniel Jones went close with a few headers and Chris Gethin managed to squeeze an effort on target but the goalkeeper was equal to it.

A disappointing result after playing so well. Two wins from two games needed for a chance of survival if only two go down.