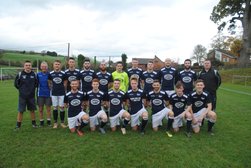 Llanfair gain another 3 points on the road

Llanfair take another 3 points to make it two away wins on the bounce with a great team performance against fellow strugglers Porthmadog.

After 3 weeks without a competitive game, Llanfair were looking to continue their recent form.

Porthmadog started strongly and their best chance was a header from close range which was brilliantly saved by Mark Richards before Karl Seliaerts cleared the rebound off the line.

Seliaerts then put Llanfair ahead after 16 minutes when he latched onto a ball 20 yards out and struck the ball brilliantly into the lower left hand corner of the net.

Llanfair pushed on and created a number of half chances before Porthmadog came close again on 31 minutes but Richards again pulled off a great save to turn the ball away for a corner.

Llanfair almost made it two before the break but a header from a corner was well saved.

Early in the second half, Llanfair were given an advantage when Jay Gibbs was firstly booked for a foul before reacting angrily and receiving a second yellow for dissent.

Llanfair made the advantage count and on 75 minutes, Alun Hughes pounced quickly to put the ball home from close range, after the goalkeeper dropped a Karl Seliaerts free kick.

On 78 minutes, Llanfair made it 3-0. A terrible error by the Porthmadog goalkeeper let Josh Astley in to score into an empty net from 6 yards.

The host pulled a goal back on 79 minutes through a great strike by Shaun Cavannagh.

Late on, Mark Richards made a number of good saves to keep Porth out and Llanfair defended really well to see the game out.

Two wins and a draw in the last 4 games. Bangor City at home next week.