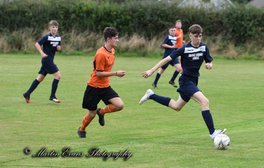 Reserves out of Emrys Morgan Cup

With higher ranked teams now back in the Emrys Morgan Cup due to the league reshuffle, the competition will become harder to win, and for our Reserve side, it couldn’t have been much harder against Tywyn Bryncrug, who sit near the top of the newly formed Mid Wales West league after a good start.

And from the beginning, it was clear that the Reserves were going to be up against it after Tywyn took the lead after only 6 minutes and were 5-0 up by half time.

It didn’t ease off in the second half, with the hosts adding another four to their first half tally to make it 9-0.

The players didn’t let the result ruin their day though, enjoying a bus tour home!

All the best to Tywyn in the next round