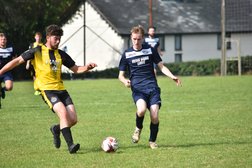 After two wins at home to Welshpool and Penrhyncoch, Llanfair Reserves were defeated away at Penparcau last Saturday

Two weeks ago, Llanfair got past Welshpool Reserves in a well fought win on Mount Field. Llanfair started the game brilliantly and were 2-0 up after 33 minutes through goals by Dan Morgan and Nyasha Mwamuka. Welshpool pulled a goal back before half time to make it 2-1. Just after half time, Welshpool were awarded a penalty but stand in goalkeeper Jack Roberts saved the penaly kick to help earn Llanfair all 3 points.

Player of the Match - Jack Roberts

Llanfair continued their winning form against the Roosters a week ago. The away side took the lead after 39 minutes but a penalty by Nyasha Mwmauka and a Ryan McVeagh goal saw Llanfair take a 2-1 half time lead.

Llanfair continued to play well and were 3-a up in the 69th minute, Max McLaughlin getting on the scoresheet.

Player of the Match: Tom Bowen

On Saturday, the hosts Penparcau took an early lead after only 3 minutes through J Perry who scored again on 33 minutes to make it 2-0. Ryan McVeagh pulled a goal back after 78 minutes but L.Lewis score a third for Penparcau who took all 3 points.

Player of the Match: