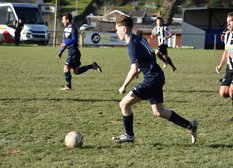 The visitors started strongest and were in front after only 4 minutes through Luke Norman.

However Llanfair responded well, equalising via a Dan Morgan penalty in the 14th minute after Callum Whyte was fouled in the area.

Caersws were reduced to 10 men after 18 minutes for violent conduct.

Dan Morgan grabbed his second of the game on 26 minutes, a brilliant left footed snap shot into the far corner of the net.

In the second half, Llanfair started very strongly but missed a host of chances. However, Callum Whyte was able to make it 4-1 on 58 minutes, steering in a Max McLaughlin cross from close range.

Caersws made it difficult for Llanfair towards the end of the game. Huw Wainwright headed in from a corner on 63 minutes before a Will Evans free kick piled more pressure on Llanfair.

However Llanfair composed themselves and held on for all 3 points.

Player for the Match - Dan Morgan