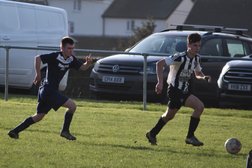 This week, a comfortable win against Llandod boosted the Reserves' end of season run but a disappointingly lost on Tuesday to Rhayader

On Sunday, last week, the Reserves made it back to back wins with a 5-1 win over Llandrindod Wells Reserves.

The visitors took an early lead but an equaliser by Dan Morgan and further goals by Ben Jones and Josh Astley meant Llanfair went into half time with a 3-1 lead.

In the second half, Josh Astley grabbed another along with Ben Jones to make it 5-1 to Llanfair.

Player of the Match: Callum Evans

On Tuesday, Llanfair found it hard to get going in a difficult game against Rhayader Reserves. The Red Kites scored two goals right before half time to take a 2-0 half time advantage.

In the second half, Rhayader continued to make it difficult for Llanfair and grabbed a third after 53 minutes.

Jack Orbell pulled a goal back after 54 minutes but Rhayader went on to score a fourth late on.

Player of the Match: Matt Roberts